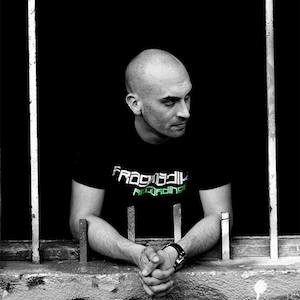 Arnaud was born in Marseille at the 21st of December in 1984. As an electronic music enthusiast, he made his debut as a Dj at the Parties and Afters, in South of France and also in the famous “Spartacus Club”.

He learned musical production with “Ableton” by himself and began producing his own songs. He is exploring the various facets of minimal and techno music. With hard working, he found his way into a dark and dancefloor techno, and took the nickname “Drumloch”.

“Drum” is for the nature of his music and fits with different kinds of batteries that he uses (kicks, drums, toms, etc.), and “Loch” is an implied reference to the Lochness, the famous lake in Scotland, with the rumor that it was the refuge of a mysterious sea monster.

Drumloch created his label named “Pragmatik Recordings” in 2012. It includes emerging talents of the Dark Techno scene. In the meantime, he works on composition and remixes for prestigious artists such as Tom Hades, Brian Burger, GO!DIVA, Albert Kraner, Elbodrop, Repressor, Sebastian Groth, Angy Kore, Mike Maass and Michael Kruck, to name a few …

At the beginning of 2013, he was hired by the prestigious Booking Agency of Subfractal in New York called “De-Konstrukt”, which includes techno artists from all over the world such as Axel Karakasis, A.Paul, Sasha Carassi, Da Fresh, Lutzenkirchen, Gayle San, Alex Bau, Spektre, Dandi & Ugo, Spartaque, etc. He also got signed on the number one and most important german vinyl label named Nachtstrom Schallplatten on which he signed a collaboration with his friends Elbodrop, a Scottish duo, and was remixed by Tom Hades, Ant Prescott, Logotech & Patrick Dsp.

Then two more vinyls were recorded on the same german label: on the first one he remixed one track of the pillars of German techno Thomas P. Heckmann, for his own album Dark Matters, alongside Alex Bau and Kramer & Niereich. The second one was on a double vinyl on which he realized a remix of Repressor (one of the two protagonists of the American duo Subfractal), alongside Knobs, Octave, Bjoern Torwellen, A-Brothers and Tex-Rex.

His first dates and gigs were abroad, in Holland, Spain and in Germany, including the legendary Berlin Club named “Tresor” and the “Off Sonar Festival” in Barcelona. Drumloch is currently preparing his first album for the label “Nachtstrom Schallplatten” and his first Live Act expected out in 2014.