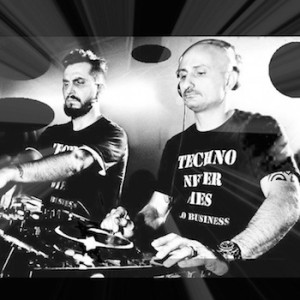 Our trip in House Music began in far 1989 when our strong friendship and our common love for club electronic music became a passion: DJ! In this way began our story of the DOUBLE DJ SET: we work in pair like we are an only one DJ, we put on the stereo two viniles for all the length of our live set, so we are able to unite our musical preferences to make our nights full of energy! In these years the evolution of Sound, Rhythm, Melody thrill us really a lot and make us listen and play different kind of music.

After all these years of amusement, nights, afterhours, curiosity brought us to discover new ways, so we bought our first personal computer and sequencer and after two years, thanks to the collaboration of a great DJ and Producer (Ricky Montanari), we made our first single: RICKY MONTANARI presents DANDI & UGO “BEAT CONDUCTOR” (Part 1 & 2) for the label “RE VOX” (Ivano Coppola A.R.), distributed from LEVELONE. Thanks to the great results of this project we could meet and co-operate with artists like Raymond Barry (Producer of electro house N.O.I.A., KLEIN & MBO, FUNK REVENGE) which whom we are co-operating nowaday.